The remains of two medieval merchant vessels, known as cogs, were discovered over the summer in Varberg in Sweden during an archaeological excavation. They have now been securely dated for the first time and analyses show that the ships were built outside of Scandinavia in the mid-14th century.

Elisabet Schager, archaeologist and project leader of the excavation, with The Archaeologists, part of the National Historical Museums of Sweden, says:

“These wrecks are a very special discovery, both in Sweden and abroad, so it has been fantastic to find them. Before these two wrecks were discovered, only 7 other cogs were known in Sweden, and only around 30 are known in the whole of Europe.”

The first dendrochronological (tree-ring dating) samples have now been analyzed. They show that Varbergskoggen 1 was built with lumber that was felled after 1346 in the region that today consists of the Netherlands, Belgian, and north-eastern France, while the smaller Varbergskoggen 2 (Varberg Cog 2) was assembled from oak that was felled between 1355 and 1357 in northern Poland. These results suggest that both vessels were in foreign waters, a long way from home, when they ultimately disappeared beneath the waves.

Cogs were medieval single-masted transport vessels that are often associated with the Hanseatic League but were also used across the whole of Northern Europe. Often seen as the successor the Viking Age knarr, cogs were designed to maximize cargo space.

Several construction details were noted during the excavation of the wrecks, all of which are characteristics identifiable with traditional cog construction. For example, the bottom strakes of the vessels were built in the carvel style, while the sides are built in the more traditional clinker style. Furthermore, the caulking between the strakes was made with moss and secured with lathes. Also, the decks were supported with bulky crossbeams which stuck out the sides of the hull.

Archaeologists have also uncovered a wide array of fascinating artifacts in the wrecks, including leather shoes and housewares made of wood and ceramic. Aboard Varbergskoggen 1 (Varberg Cog 1, the larger of the two), a rare cache ship equipment and reserve parts was discovered, protected from wreck plunderers by a pile of ballast stones.

According to Schager the finds gives a detailed account of life at sea:

“We have a lovely assortment of personal objects that represent parts of the crew’s daily routines, like wooden bowls and spoons. A number of barrel lids, some of which have what appears to be maker’s marks carved in them, were also unearthed among the wreckage. We have collected and are analyzing soil samples as well, which will hopefully be able to identify the remnants of food and/or cargo. We will even search for parasitic remains, which could identify if animals were kept onboard, and if so, which species. We hope to be able to piece together where the cogs’ fateful journey originated, and where they were headed.”

More analyses are in the works which should help to add further precision to dating the wrecks, and even help to understand how long they were in use before their demise.

The cause of the sinking of the cogs is still not clear. “Once we have cleaned every timber from the wrecks, and critically analyzed them, we will hopefully be able to get to the bottom of the mystery. The information we could gather from the initial excavation is that the larger Varbergskoggen 1 had rolled on to its port side in shallow waters while it was still rigged”, says Schager.

Varbergskoggen 1 (Varberg Cog 1) consists of the nearly complete port side of a cog and is circa 20.5 meters long and 5 meters wide. Varbergskoggen 2 (Varberg Cog 2) comprises the remains of the forward end of the bottom of the hull of a cog, roughly 8 meters in length and 4,5 meters in width.

Since 2019 the Swedish Transport Administration has been overseeing the construction of a railway tunnel below Varberg. Arkeologerna, SHM (The Archaeologists, National Historical Museums of Sweden) have led the archaeological investigation and excavation of the area affected by the construction, in cooperation with archaeologists from Halland Museum of Cultural History as a partner. It was during this project, in the spring of 2022, that the wrecks of the two cogs were discovered. The excavation of the wrecks was carried out with the expert help of marine archaeologists from Visuell Arkeologi and Bohusläns Museum. The dendrochronological analyses (tree-ring dating) of the wrecks were conducted by Aoife Daly, at dendro.dk. The documentation and study of the wrecks will continue in 2023, including 3D scanning of the ships’ individual timbers, as well as various other scientific analyses. 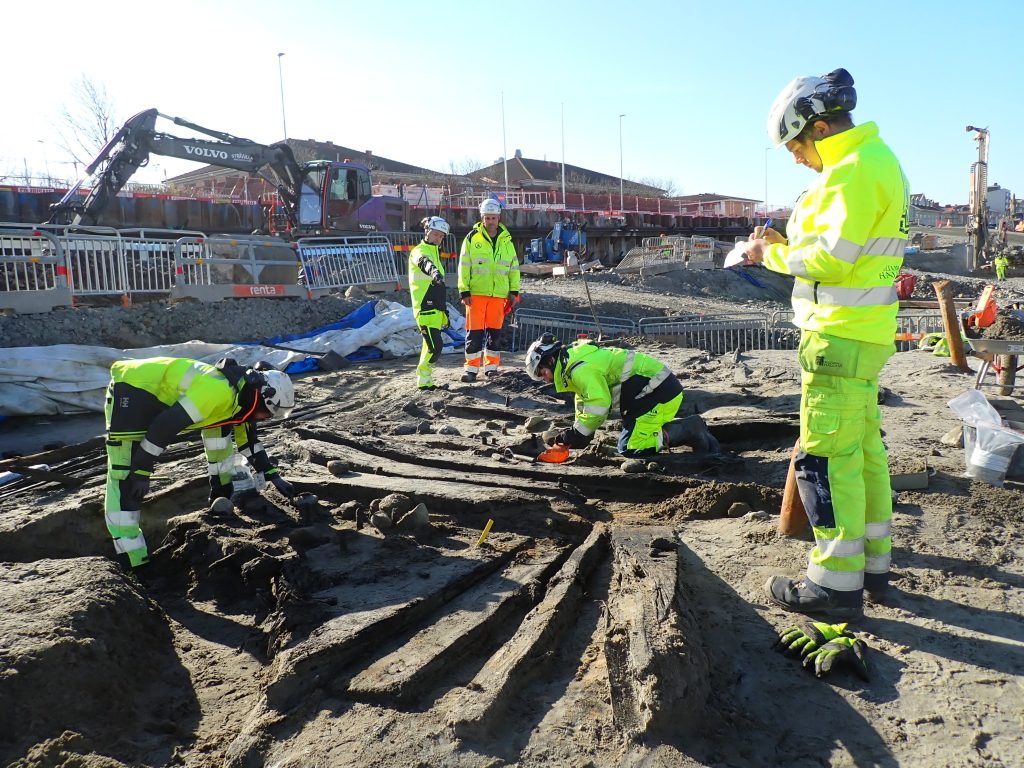