A hundred years ago, the church of Vreta underwent substantial renovation. During the work, parts of several eleventh century burial monuments were discovered. Previously, the obvious placing of these was thought to be on graves in the present churchyard. The archaeological excavation, carried out in the autumn of 2019 in conjunction with work of laying underground pipes, revealed that an older churchyard was situated 150 metres to the south of the present-day church. 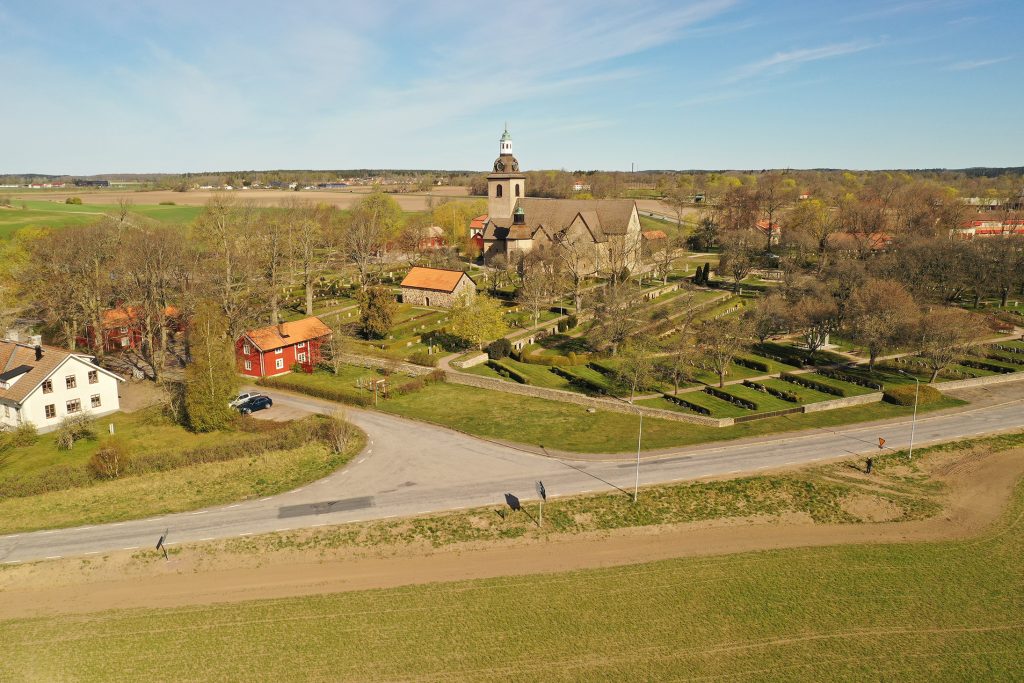 The church of Vreta Abbey and churchyard from the beginning of the twelfth century. The lately discovered burials are understood to be part of a churchyard located to the south of the present churchyard. The skeletons were discovered in a trench for underground pipes, dug in the field along the roadside on this side of the road (the grey area – the trench was backfilled). Drone photo from the south, Johan Stenvall, Arkeologerna/The Archaeologists.

Most likely, this was a predecessor to the presently used churchyard. In that case, this would be the original placing of the early Christian burial monuments, to mark graves close to a contemporary wooden church. A fragment of a burial monument was discovered at the site of the excavated burials.

At least 70 burials were discovered and 19 of these were excavated. The remaining burials were covered over and the pipes could be laid along a different route. The burials continued along a stretch of 65 metres and most of them were placed at a distinct distance from each other. This indicates that the graves once were visible and that they were respected when later graves were dug. It also shows that the burials in this area took place over a short period of time even though the graves amount to a couple of thousand.

Our first thought was that the graves were from the latest outbreak of the plague in 1710-1711, when many people were buried in a short space of time. During the course of the archaeological excavation, it became clear that the skeletons were from a quite different time. One indication of this was the teeth; there was hardly any dental caries, and they were also considerably worn. Moreover, many of the men were tall; over 180 cm. According to our osteologist Caroline Arcini, these observations contradict the idea that the bones date from the eighteenth century. In the eighteenth century, around 80-90% of individuals had teeth decayed by caries. Caroline instead considered the skeletons to be of medieval date. Four of the skeletons were thereafter radiocarbon dated and the results point towards the eleventh century. 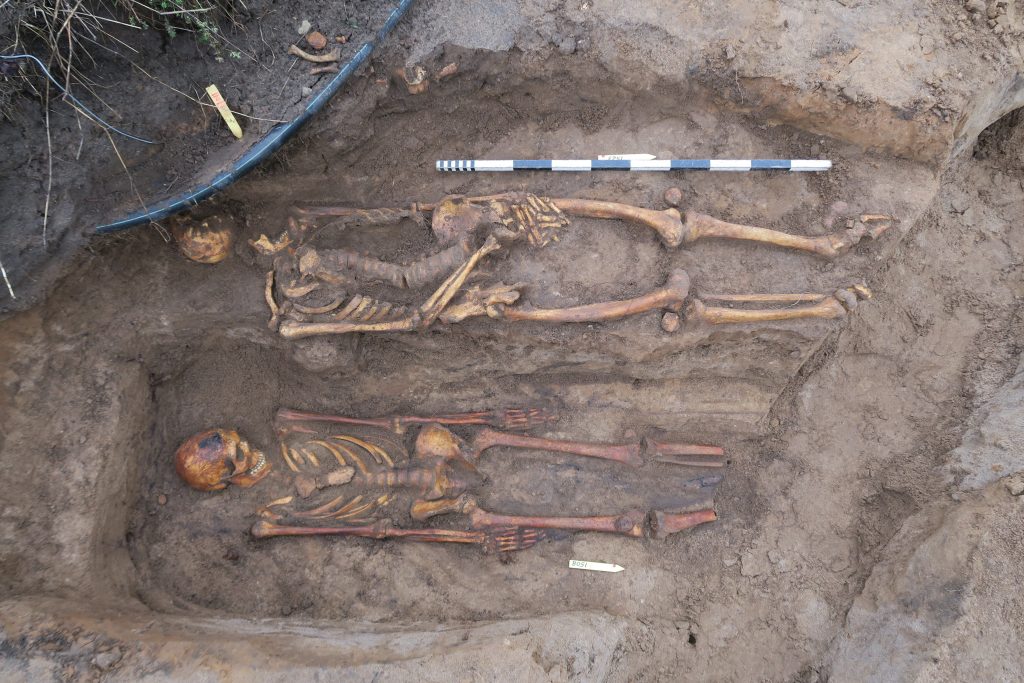 Two of the 19 skeletons. These were well-grown men. Photo Rikard Hedvall, Arkeologerna/The Archaeologists.

New picture of the earliest history of Vreta

These burials, recently discovered in the field, provide us with a new and somewhat different picture of the earliest church history of Vreta. Different in that they belong to a churchyard that was situated some distance away from the later church and churchyard. It was more usual to build the new church on the old churchyard, on the same site as the old church, or adjacent to it. It is very probable that traces of an eleventh century wooden church might also be found close to the newly discovered burials. The excavation has not provided an answer to where the old church was placed, but it can be suspected that it was located to the north of the now excavated burials, and to the north of or underneath the present road of later date, Ledbergsvägen. This interpretation is based on the assumption that the farm, to which the church originally belonged, was situated on the site of the present church and churchyard, which was consecrated around the year 1100. At this time, the earlier church was probably demolished and the old churchyard abandoned. The older burial monuments then came to be used in extensions of the church and when the abbey were constructed.

Who were the buried people?

The buried people were children and adults, men and women. In order to reveal more information about the buried people, an osteological analysis is necessary; this would show the age, length, dental state and whether there were any pathological variations. The skeletal material is an important link to the early history of Vreta. It provides a picture of the people who lived in Vreta before the abbey was established. Who were they then, the people buried at the newly discovered churchyard? Were they people who came from the aristocratic farm of Vreta or did they come from the neighbouring farms? Did some of them belong to the elite who formed alliances among noble families, and who in some cases came from far away.

We are now waiting for response to an application for funding in order to be able to conduct an osteological analysis, and to be able to determine the date of more of the skeletons. Strontium analysis of the bones would also clarify whether the people grew up here or if they came from abroad. We would moreover like to find the outer limits of the churchyard to determine its size. Several of the burials are very shallow; this means that the skeletons are crushed when the field is ploughed, which is a major problem. It is likely that the topsoil was moved when the road Lerbergsvägen was constructed, resulting in the thin layer of topsoil. 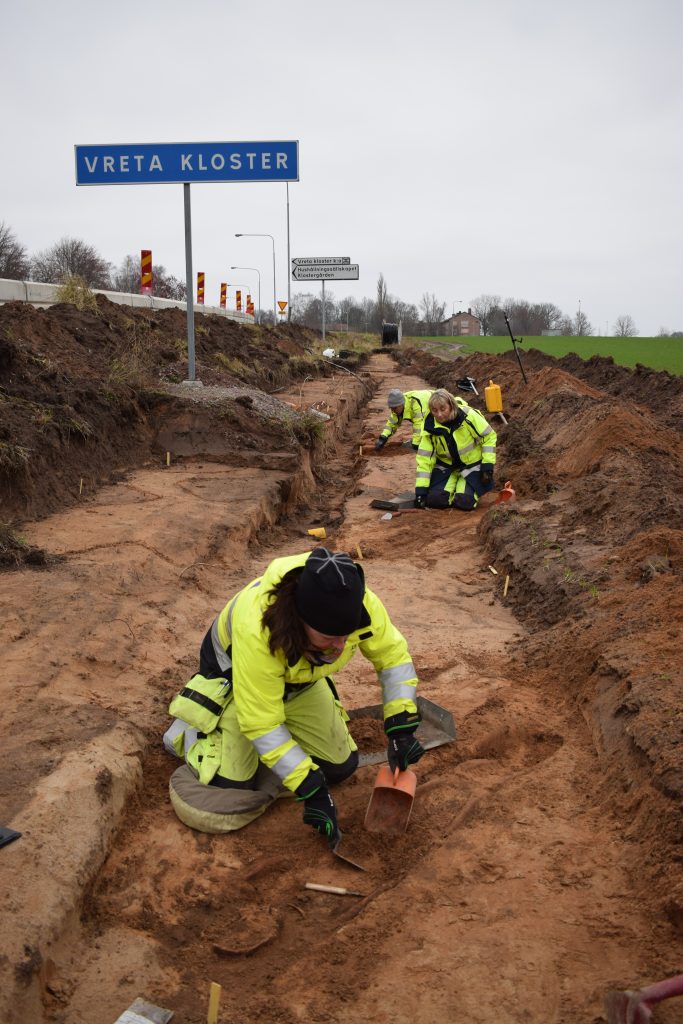 The skeletons from the lately discovered churchyard form a unique material. In Östergötland, and possibly even in Sweden, there are no other known skeletal remains from such a delimited period as the eleventh century. The skeletons appear to represent the first generation of Christian people in Vreta, which provides an opportunity to study early Christian burial customs. For example, it might be possible to find traces of where the early Christian burial monuments once stood, and there might even be parts of the monuments left by the burials. From an osteological point of view, the remains offer an unequalled opportunity to study the eleventh century population.

The only locations where early Christian burial monuments were discovered in original places are at Heda, St Martin in Skänninge and Klosterstad. Traces of a contemporary wooden church have moreover been excavated at Klosterstad. Burial monuments have been discovered in a secondary placing at around 40 other church sites in Östergötland. Similar to Vreta, the sites show where the earliest churchyards and churches were placed in the eleventh century. This was a period when Christianity was beginning to be well established, at least in the rich farmland areas of Östergötland, extending from Vikbolandet to the Plain of Vadstena. 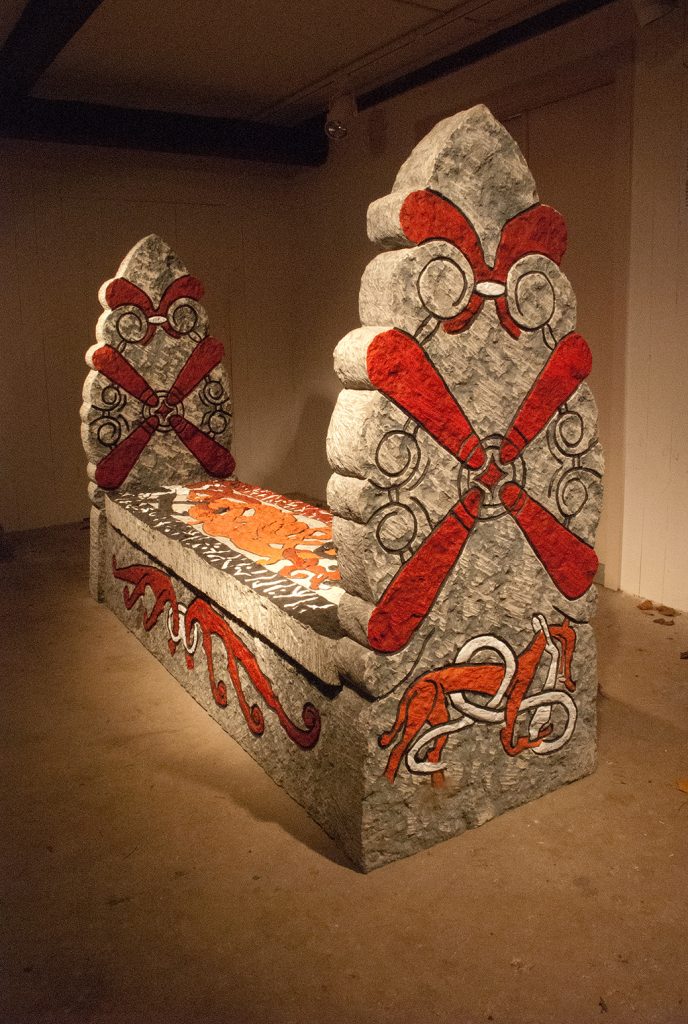 During the archaeological excavation, a stone fragment from this type of coffin was found. These monuments are decorated with fighting dragons and snakes, which is interpreted as the battle of the Church against heathendom. They are the earliest Christian burial monuments in Sweden, dating from the eleventh century, occurring at around 40 church sites in Östergötland. The reconstructed monument on the picture is placed in Örberga tithe-barn, near Vadstena. Traces of paint have been documented on several of the early Christian burial monuments. Photo Rikard Hedvall, Arkeologerna/The Archaeologists.